While the whole world is talking about Bitcoins monthly growth rates and the performance of the global stock markets and housing markets, the reality is that frothy asset prices based on zero interest rate policies and over $12 trillion of cumulative printing from the central banks around the world have led to these temporary speculative results but it is a sheer function of real currencies losing purchasing power on a relative basis and an excessive amount of printed money finding its way into the financial markets without a reasonable place to store your wealth in those same global financial markets as a direct result of these policies.

Savers around the world have been dramatically punished as it is next to impossible to earn a yield on your hard-earned savings, forcing them to put their money in speculative financial markets to chase yield.  Likewise, when junk bonds yield less than 6 %, in some cases as low as 4.5 %, there is a serious flaw in the value placed on risk in today’s market.

And when homeowners, who are finally starting to see the light after the financial crash of 2007-2009, decide to take out a second mortgage to buy bitcoin, we can only say this will end badly at some stage, as irrational investors are again not recognizing all of the warning signs they are facing.

With corporations now forced to use Non-GAAP, 12 months forward earnings to justify their lofty stock prices, there is a fundamental problem with valuations.

And with states like Illinois and Vermont on the brink of bankruptcy, along with several other municipalities not to mention countries like Italy, Portugal and Greece, it makes you scratch your head and wonder where it has all gone wrong and how we have been unable to see it.

The problem is, like with any period of irrational exuberance, you only find this out when it is too late and the bubble has popped. 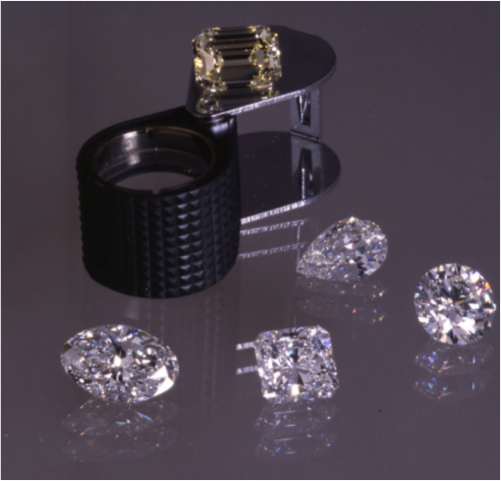 Our clients, who have been trying to stay ahead of the curve, have been utilizing colored diamonds as a long-term wealth preservation vehicle, a form of private diversification, a good currency hedge and as a stable and consistent long-term growth vehicle.

With the Argyle Mine expected to close in the next 3-5 years, sales of colored diamonds at the auction and dealer level growing at a healthy rate, the number of millionaires around the globe almost tripling to over 36 million in the last decade and the re-pricing of assets around the world on the horizon as speculative funds shift with changing interest rate policies and economic environments, it is very important to keep a balanced and diversified portfolio, including rare colored diamonds. 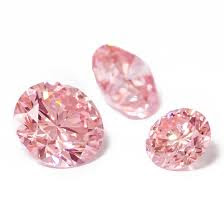 The mining company sold all 262 polished diamonds that were on offer, including 15 rare pinks weighing 15.31 carats. Another nine colorless diamonds weighing 28.8 carats sold for $347,500, it reported.

The auction attracted 85 firms, including from the US, Belgium and China, while the majority were Israeli, said Pavel Vinikhin, director of Diamonds Alrosa, the company’s polished division.

“Fancy colored polished diamonds represented the main assortment of our November tender,” he explained. “Such pieces are always in great demand among our clients, especially the rare pink ones.”

While rough diamonds form the bulk of Alrosa’s revenue, the company has recently increased its marketing and branding of polished that it manufactures in-house.

Over the last few months the company has been promoting the Dynasty collection at various bourses around the world. The collection is an assortment of five colorless, round diamonds cut from the same rough, with a 51.38-carat, D-color, VVS1-clarity gem as its centerpiece.

It is the first such marketing campaign that Alrosa has undertaken for polished, and culminated in an online auction on November 29. The company is mulling similar polished collections and campaigns in the future, Vinikhin told Rapaport News.

If you’re familiar with the “Four Cs” when it comes to diamond grading, you know that one of those “Cs” is the category of “color.” It is known throughout the jewelry business that the more color a diamond has, the less valuable it is, and while that’s somewhat true, it’s only true when the color is a non-fancy yellow. The authority that determines whether a diamond is “fancy” or not is the grading lab, most notably, the Gemological Institute of America.

A “fancy” colored yellow diamond – for example, often called a “canary” diamond – is a diamond that is vibrant in hue and not seen as brownish in any way, thus excluding it from the GIA grading scale of D through Z. And while yellows are the most common fancy colored diamonds, diamonds do come in just about every color. Red, green, violet, blue, pink and orange are the rarest. The Hope Diamond, for example, is a 45.52-carat Fancy Deep Grayish Blue gem that is worth about $350 million.

Colored diamonds are formed when carbon is exposed to ideal levels of pressure and temperatures that are either mixed with chemical composites, such as hydrogen or Boron, or alternatively that crack and create refractions that will lead to the appearance of color, like an exploding star.

It is important to note that all colored diamonds, especially larger colored diamonds (often .50 carats or bigger) should be accompanied by some sort of grading report issued by the GIA so that the buyer is aware of the true color and quality of the diamond.

The pear-shaped, modified-brilliant-cut diamonds, weighing 3.36 carats and 2.71 carats with VVS2- and VS1-clarity, respectively, sold for $12.6 million, well above their estimate of $6.5 million to $8.5 million, Christie’s said. Both stones have the potential to be re-cut to be internally flawless, the auctioneer added.

Total proceeds at the auction came to $62.6 million. The sale followed a Sotheby’s auction in New York, in which the top item, a 5.69-carat fancy vivid blue diamond ring, found a buyer at $15.1 million, beating its $15 million upper estimate. 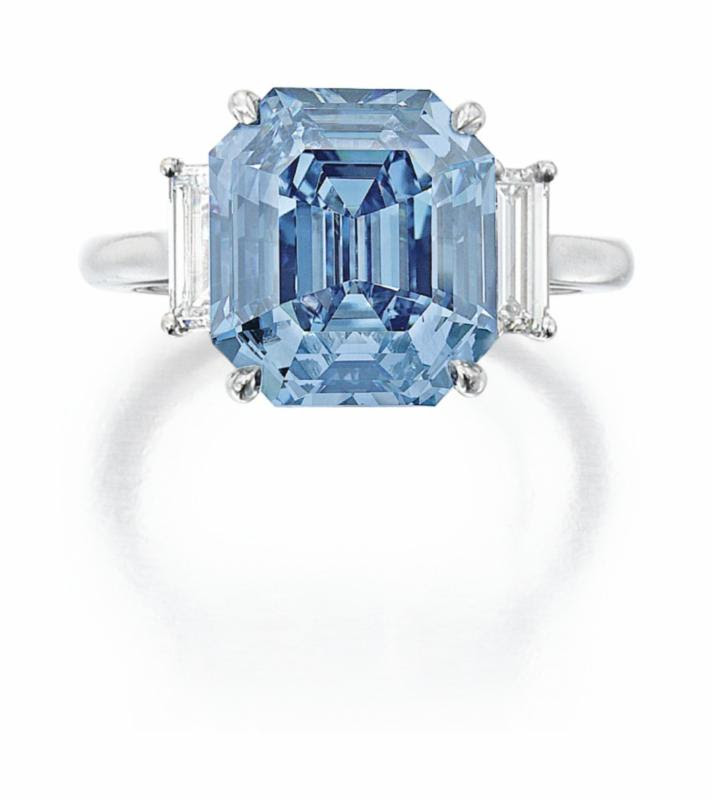 An anonymous buyer spent $15.1 million, or $2.7 million per carat, on an emerald-cut, 5.69-carat, fancy vivid blue, VVS1-clarity diamond ring, beating its upper estimate of $15 million, the auctioneer said. Meanwhile, a pear-shaped, 2.05-carat, fancy intense blue, internally flawless diamond ring fetched $2.7 million, or $1.3 million per carat, in a sale to a member of the trade — well above its high estimate of $1.5 million.

Sapphire jewelry also attracted strong prices. A Van Cleef & Arpels bracelet containing 193.73 carats of the blue stones went to a private collector for $3.1 million, having drawn an estimate of up to $1.5 million. A sapphire-and-diamond necklace-bracelet combination by Harry Winston — with seven emerald-cut sapphires weighing a combined 123.13 carats — fetched $1.9 million, beating the expected price of up to $1.5 million.

A 110.92-carat, L-color, VS1-clarity diamond — the largest round diamond in auction history — appeared on Sotheby’s list of unsold lots. The company did not immediately respond to a request for comment outside of New York working hours.

A collection of fancy vivid yellow diamonds once owned by South Africa’s mining elite sold earlier in the month at a Bonhams auction for well above its expected price. 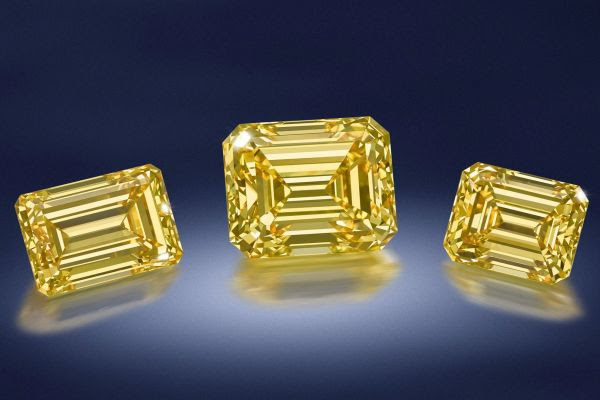 The diamonds first surfaced in 1940, when R.V. Cullinan — son of the renowned diamond magnate Sir Thomas Cullinan — asked De Beers director Pierre De Villiers to buy him some diamonds on his next visit to Kimberley, Bonhams explained. On the train ride back from the mine, De Villiers showed what he had sourced to Sir Thomas Oppenheimer, the founder of Anglo American, who replied that he had something better. Oppenheimer revealed a set of yellow diamonds, which De Villiers purchased, keeping half and giving the others to Cullinan.

The collection remained in the Cullinan family until Thursday, when it sold as two separate lots at the Bonhams London Fine Jewellery sale for a total of $773,350 (GBP 577,750).

“The fancy vivid yellow diamonds in this collection are exceptionally well-matched in color and boast an enviable provenance,” said Jean Ghika, Bonhams’ director of jewelry for the UK and Europe.

“It’s important to remember that only one in approximately 10,000 of all diamonds mined has a fancy color,” said Ghika.

“Fancy vivid yellow diamonds are some of the rarest in the world and the best examples are prized for their extraordinary vibrant tone and sun-like hue. They are increasingly sought after and we anticipated that they would attract a lot of interest from discerning collectors around the world,” she added.

Separately, Bonhams New York sold a Harry Winston diamond necklace, once owned by Zsa Zsa Gabor, for $1.3 million. The piece, which contains 45 round brilliant-cut diamonds weighing a total of 66 carats, sold to an anonymous online bidder, the auction house said.