The busy fall season is in full swing, with several important auctions taking place in Hong Kong, Geneva and New York in the coming weeks.  The Hong Kong show was very important, with traffic up and strong sales in the colored diamond pavilion, especially at the private and dealer level.

With the busy holiday buying season upon us, it is a very good time to position yourself in the colored diamond market, as the fourth quarter is always the strongest time of the year. 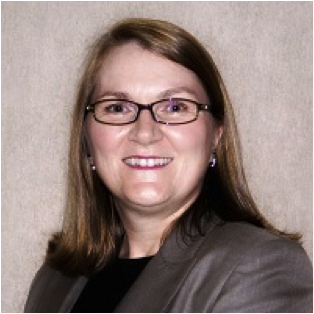 The Natural Color Diamond Association (NCDIA) has formed an affiliation with an Asian gemological organization in an attempt to extend its support and educational services to the region.

The trade body will establish NCDIA Asia by partnering with the Asian Institute of Gemological Sciences (AIGS), it announced recently. AIGS president Barbara Wheat (pictured), who moved from NCDIA to the Bangkok-based organization in March, will lead the affiliation.

“Through this collaboration, AIGS will be our hub in Asia for expanding our education and relationships with wholesalers, retailers and consumers,” said NCDIA president Alan Bronstein. “Our headquarters will remain in New York, but our goal is to provide local support to our members in strategic areas of the world that offer great potential in expanding consumer interest in natural-color diamonds.”

AIGS will support NCDIA in creating online educational courses, which will be available from early 2018.

Jewelry has zoomed ahead of cars in Knight Frank’s Luxury Investment Index, as appetite for modern pieces has accelerated.  Jewelry prices rose 4% in the 12 months to June 30, the real-estate firm said in a recent research report, based mainly on data from Art Market Research. This compares with a 2% increase in the value of classic automotives, which have dominated the rankings in recent years.

Over the past five years, jewelry prices have jumped 49%, and over the past decade they have leapt 142%, Knight Frank said

“There is a current trend for jewels from the post-war era, where the emphasis is on design, quality and workmanship,” said Jean Ghika, head of the London jewelry team at Bonhams auction house, which contributed to the Knight Frank report. “These pieces, often unique or in limited supply, are easy to wear, distinctive and increasingly sought after by discerning collectors.”

Colored diamond prices have gained 89% in the past 10 years and 15% in the past half-decade. The watch category advanced 65% over the decade, 24% over five years and 4% over 12 months.

“Jewelry has always been a traditional store of portable wealth,” said Andrew Shirley, editor of Knight Frank’s Wealth Report. “There are few other investments of passion that you can simply scoop up, put in your pocket and run away with in an emergency.

“Hopefully it won’t come to that for most of us, but it’s still reassuring to know that jewelry has been one of the best-performing asset classes in our Luxury Investment Index over the past 10 years,” he added.

Sales at specialist jewelry stores in the US increased 4% year on year to $17.36 billion in the first seven months of 2017, according to data from the nation’s Census Bureau.

In July, sales jumped 11% to $2.47 billion, the data showed. Figures are all unadjusted for seasonal fluctuation.

Consumer confidence improved in July and August, according to the Conference Board’s Consumer Confidence Index. However, the measure slipped 0.5% in September.

Confidence decreased significantly in Texas and Florida in September as they were the most affected by Hurricanes Harvey and Irma, explained Lynn Franco, director of economic indicators at the Conference Board.

“Despite the slight downtick in confidence, consumers’ assessment of current conditions remains quite favorable, and their expectations for the short term suggest the economy will continue expanding at its current pace,” she added. 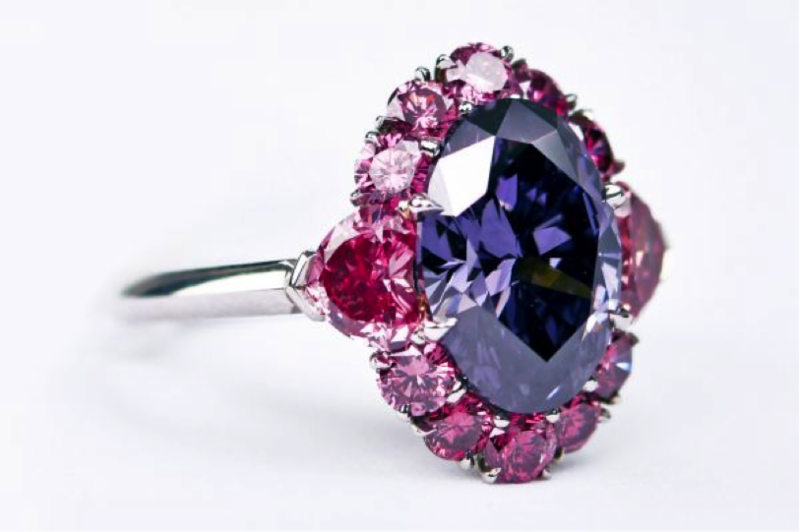 Australian jeweler Linneys is showcasing $100 million worth of jewelry featuring rare colored diamonds from the Argyle mine.

The highlight of the collection is a ring containing the Argyle Violet, a 2.83-carat fancy deep grayish bluish violet diamond that Rio Tinto recovered from the iconic mine in Western Australia. The stone — the top diamond from the 2016 Argyle Pink Diamonds Tender — is surrounded by 10 round vivid pink diamonds from Argyle, which together weigh 0.83 carats, and two heart-shaped Argyle vivid pink diamonds weighing a combined 0.67 carats.

The Argyle Violet is extremely rare: last year Rio Tinto said the mine had yielded only 12 carats of polished violet diamonds in 32 years of the annual tender. New York-based L.J. West Diamonds bought the stone last year for an undisclosed amount.

“Featuring the finest colored diamonds from the Argyle diamond mine and across the globe, this exclusive showcase represents rarity never before seen,” said David Fardon, director of Linneys. “This is the first time in Australia we have seen a jewelry collection valued in excess of $100 million.” 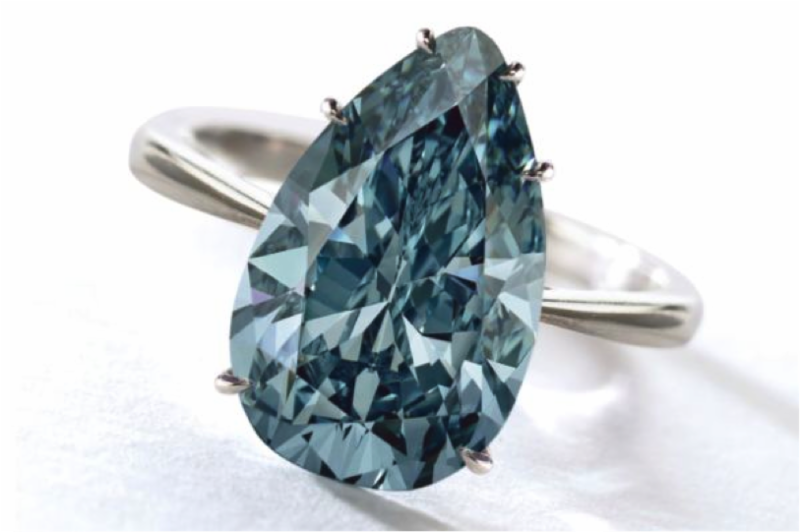 The pear-shaped, 5.14-carat, fancy deep blue, SI1-clarity diamond, is mounted on an 18-carat white gold ring, Sotheby’s said. The pre-sale estimate translates to a price of up to $1.9 million per carat.

The sale on October 3 will also include a set of earrings, each featuring a pear-shaped fancy pink diamond — one weighing 5.21 carats and internally flawless, the other 5.01 carats with VS1 clarity. The pair carries an estimated price tag of $3.8 million to $5.1 million.

Meanwhile, a 13.26-carat ruby and diamond ring, designed and mounted by Bhagat, will go under the hammer with an estimated price of $8.7 million to $11.3 million.

The auction will also feature a Cartier “tutti-frutti” bracelet estimated at $1.3 million to $1.8 million.

Sotheby’s will auction the Raj Pink diamond next month for an estimated $20 million to $30 million, the company announced Sunday. 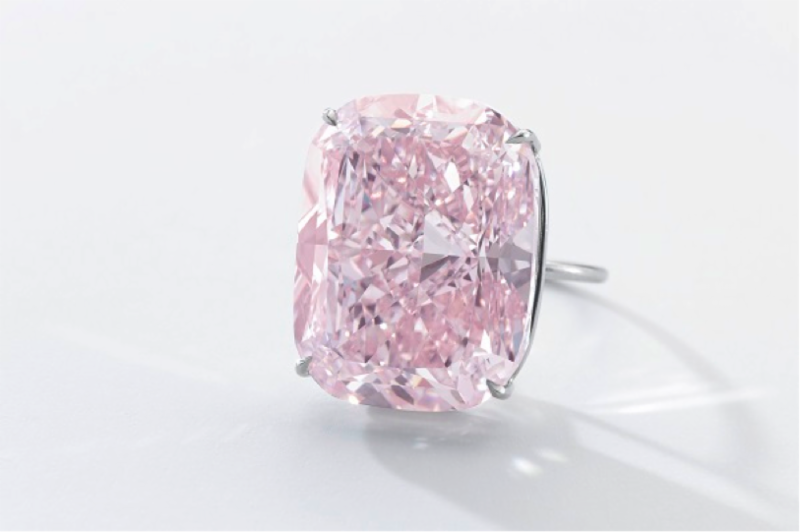 Weighing 37.30 carats, the diamond is the largest fancy intense pink diamond on record, according to Sotheby’s. It will headline the auction house’s Magnificent Jewels and Noble Jewels sale in Geneva on November 15.

“The discovery of any pink diamond is exceptional, but the Raj Pink’s remarkable size and intensity of color places it in the rarefied company of the most important pink diamonds known,” said David Bennett, chairman of Sotheby’s international jewelry division.

The auction house set the current record price for a fancy intense pink diamond when it sold the Graff Pink for $46.2 million, or $1.86 million per carat, in November 2010. At 24.78 carats, the Graff Pink is a third smaller than the Raj Pink and has a lighter color, Sotheby’s noted.

Since that sale, the auction market for exceptionally rare and beautiful colored diamonds, notably pinks and blues, has been buoyant.

The rough diamond that yielded the Raj Pink was studied for over a year after its discovery in 2015. A master cutter crafted it into a sparkling cushion-modified brilliant cut.

The Gemological Institute of America (GIA) characterized the diamond as an “astonishing stone,” describing its hue as “a very bright and ravishing fancy intense pink color.”

“For a diamond to display strong, unmodified pink color like that observed in the Raj Pink is rare, particularly at so considerable a weight,” the GIA added.

What’s in store at the Geneva auctions in November

At its Magnificent Jewels and Noble Jewels sale on November 15, Sotheby’s Geneva will present the three following extraordinary rings:

Property of a Countess

Clarity, type IIa – was purchased by Harry Winston circa 1970.

As for Christie’s, the star of the Geneva auction on November 14 is a giant diamond originating from the largest rough in Angolan history.  “The Art of DeGrisogono” is an emerald-cut, 163.41 carat stone that DeGrisogono, a Swiss jeweler, cut and polished from the 404.20 carat rough.  It will be the largest D color, flawless diamond to appear at auction.

The Color of your Money

Is it worth investing in colored diamonds?  With scarcity pushing

up prices, the answer seems to be yes.  By Rachel Taylor

With a return that outstrips white diamonds, rare top-quality examples of colored diamonds are proving to be an attractive alternative investment for buyers with an eye on the future and pockets deep enough to compete.

Research released las month by the Knight Frank Luxury Investment Index (KFLII) claims the price of colored diamonds has risen 89% in the past decade, while white-diamond appreciation over the same period has been slower at about 30%.  The decade’s worth of data that Knight Frank has compiled shows that color matters when it comes to a return on investment.  Between 2010 and 2015, pink diamonds delivered the highest growth at 189%, blue diamond prices rose 89%, and yellows were up 17%.  Over the past year, however, blue diamonds have taken over as the stone to invest in, delivering a 5.5% increase. 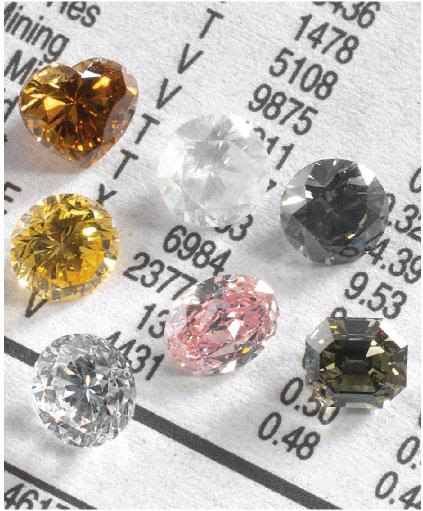 Scarcity, of course, pushes up prices, and while that’s good news for those already invested in colored diamonds, could it be prohibitive to those looking to jump on this investment opportunity?

“We have kept and maintained our inventory of yellow diamonds, as well as invested in more popular sizes in pink and blue diamonds to balance market demands,” says Bruno Scarselli, a partner in the company.  “We still maintain that there is exceptional value in the family of yellows, which we increasingly sell well over other colors due to their (comparative) affordability.”

In an interview with The Street, Bogle said:  “The valuations of stocks are, by my standards, rather high,” adding that “my standards, however, are high.”

When considering stock valuations, Bogle’s method differs from Wall Street’s. For his price-to-earnings multiple, Bogle uses the past 12 months of reported earnings by corporations, GAAP earnings, which include “all of the bad stuff,” to get a multiple of about 25 or 26 times earnings.

“Wall Street will have none of that,” said Bogle. “They look ahead to the earnings for the next 12 months and we don’t really know what they are so it’s a little gamble.”  He also noted that Wall Street analysts look at operating earnings, “earnings without all that bad stuff,” and come up with a price-to-earnings multiple of something in the range of 17 or 18.

“If you believe the way we look at it, much more realistically I think, the P/E is relatively high,” Bogle said.  Bogle added that earnings growth in the years ahead might be “as low as 4% or 5%, maybe 6% lower than traditionally and historically.”

“I believe strongly that [investors] should be realizing valuations are fairly full, and if they are nervous they could easily sell off a portion of their stocks.”  Of course, earnings don’t matter at all anyway… for now…  As a reminder, Bogle is not alone in his view that “valuations are high”…

So much for that warning, and, of course, it would not be Jack Bogle if he didn’t conclude that…

“One thing that I strongly urge: Don’t ever, ever, ever if you’re an investor think of being out of the market or in the market,” Bogle said. Instead, an investor should adjust his or her asset allocation.