Blue Diamonds have become celebrities on the auction scene with all the attendant fame. The fanfare continues this month with an 8.01-carat fancy vivid blue diamond ring by Cartier, named The Sky Blue Diamond, set to be auctioned at Sotheby’s Geneva. But what accounts for the soaring interest and stratospheric prices that these diamonds command in today’s market? From gemologists to diamond brokers to the heads of jewelry sales at the two major auction houses and an industry expert, the answer can be summed up in two words: extremely rare.

All Eyes on Blue

Part of the interest in blue diamonds can be attributed to a growing attraction for color diamonds in general. “In 1990, the color diamond business was only a fraction of what sales are today,” Mr. Scarselli, a wholesaler based in New York City. He credits the fashion industry for encouraging “an appetite for color” in diamonds by introducing clothing collections in vibrant tones. According to John King, chief quality officer, Gemological Institute of America (GIA), December 31, 1999, marked a turning point that led to the burgeoning interest in blue diamonds. At the turn of the Millennia, De Beers unveiled its Millennium Jewels Collection, which included 11 blue diamonds and one colorless diamond at The Millennium Dome in London. “The blue diamonds received a lot of media attention, which got people talking,” King explains. “At the same time, just enough stones became available to establish a market. Auction sales gave people something to benchmark the value,” he elaborates.

“There is so much more buzz now. There is more awareness of how rare these diamonds are,” explains Mr. West, a color diamond specialist based in New York City. “Previously, information about these exotic stones was only available to the most involved collectors. But now there are more discussions within the high-end jewelry trade.” And while collectors might consider a blue diamond the ultimate investment, “more and more people are discovering the beauty of a blue diamond,” says West, who admits to being “passionate” about these diamonds.

“It all comes down to a recognition of rarity,” says Gary Schuler, head of the jewelry department at Sotheby’s in New York City. “And there are men who will wear a blue diamond so there is double the buying potential,” he points out, offering another explanation for the stone’s popularity.

A diamond’s blue color is the result of traces of boron. “First consider the unique set of conditions in the world required to produce diamonds in general. But blue diamonds require a special environment where the nitrogen is missing and boron takes its place,” explains Christopher P. Smith, president, American Gemological Laboratories (AGL).

“Color diamonds overall represent a very small percentage of diamonds mined,” says King. “Perhaps one in 10,000 exhibits any color. A diamond with any evidence of blue color — even if the color is very faint — is less than one-tenth of 1 percent of what would be mined in one year.”

Historically, some blue diamonds were discovered in the Golconda region in India; the Hope Diamond has been traced to that area. However, the only source to produce a very small but consistent supply of blue diamonds is the Cullinan Mine in South Africa, owned by Petra Diamonds.

Color diamonds are graded for color saturation from fancy, intense, vivid, deep to dark, with fancy being the lightest, deep the darkest and vivid the most saturated and brightest.

“The appreciation of color diamonds starts from the expectation of visual interest, which doesn’t happen with a lighter color,” explains Scarselli. “Stronger, richer colors are more highly valued and they occur so much more rarely that the price differences can be quite extreme,” he points out.

Diamonds exhibiting a blue face-up color can occur in a range of shades that may extend from faint to intense, vivid, deep and dark. To understand how the color impacts price, Smith advises looking at the amount of color that is seen face up. “There is the progression to more obvious color face up. Fancy will reveal a noticeable color face up. There is a very apparent, nice pure color in comparing- fancy versus intense” continues Smith, noting. that the latter exhibits more color.

“Fancy grade represents about one-half of the blue diamonds that we see in terms of depth of color. About half of those diamonds are fancy blue with a gray range,” King explains.

Secondary tones also impact value. “If it is a straight blue, it is always going to have that much more of a premium. The secondary tones relate to the color that is next to it, which in the cases of blues would be gray. Almost all of these have a secondary tone. There are steely gray, bluish gray and violetish blue gray.”

“The vivid blue is most sought after for its color. It stands apart for the brilliance of a D flawless diamond with blue added,” says West. Still, Scarselli injects a note of caution. “There will be a moment that the vivid blue will have reached such a plateau and such a high price that even the most sophisticated buyer may not have the disposable dollars to acquire it and their interest should spill over to the gray blue and the intense blue,” he predicts.

Pushing Up the Price

“The stones that are available for sale and the state of the market determine the price,” says Kadakia, who identifies the market today as “dominated by an acute shortage of blue diamonds.

“Rarity is the number-one calling card that pushed the value of blue diamonds to greater heights, even in a down economy,” said West, pointing out, “On the wholesale level, it is small enough to be considered a coveted collection.” Blue diamonds are not a leveraged commodity, West goes on to say, nor are they cash-flow sensitive as is often the case with white diamonds.

“There is no great mystery behind the increase in value, as there are many more clients out there who are capable of spending in this kind of price range,” says Schuler. For the very wealthy, blue diamonds remain a very lucrative asset that appreciates in value. Scarselli notes that the increase in per-carat price far exceeds gains in the NASDAQ or Dow Jones Industrial Average (DJI) over a comparable period.

“There is so much uncertainty in this world, “says Barguirdjian. “The affluent always look for super, super rare assets — whether in diamonds or art.”

Blue diamonds represent the pinnacle of rarity, value and quality in the rare colored diamond market. 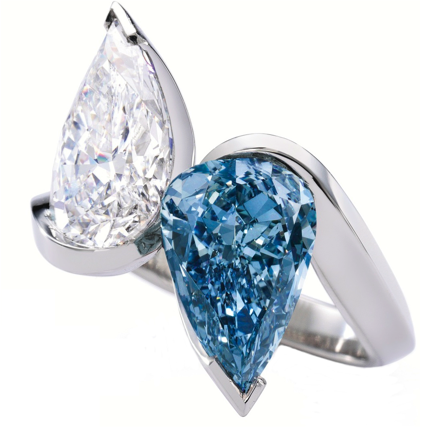 Industry experts see no softening of demand for blue diamonds and expect it to continue given the dwindling supply and escalating costs. “I would tell collectors to really buy the best. Pay the price you have to pay to buy a great gem. They are only going to increase in value,” advises Kadakia. King concurs, “There is no reason to believe that there will be a glut of blue diamonds in the market.” Scarselli points to the “tremendous amount of money” out there looking for that rare item that will drive prices up “exponentially.”

“A blue diamond is one in millions of millions of diamonds,” says Barguirdjian, adding, “something so very rare keeps its value over time and appreciates.” But even in that rarified world of blue diamonds, those stones that make headlines are “the right stone,” says Schuler. “It has to have the saturation of color and has to be just right so that people fall in love with it. And if it is going to set records, more than one person has to be in love with it,” he concludes.